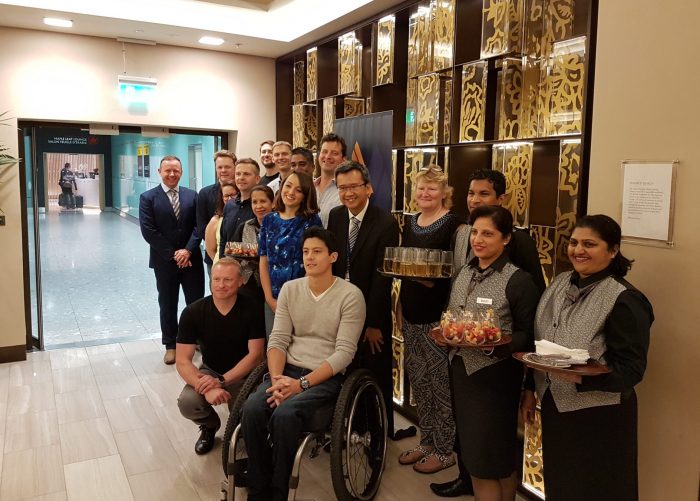 What to Expect from a Trade Mission

The Creative and Digital Trade Mission to Singapore on 20-23 September saw several small UK companies get their first taste of the ASEAN markets. Marcus Greenslade, Digital Content and Marketing Manager at the UK-ASEAN Business Council (UKABC), also joined for his first Trade Mission.

On the morning of Wednesday 20 September, eleven bright-eyed delegates accompanied by representatives from Enterprise Nation, HSBC, and the UKABC, arrived at Heathrow Airport to begin their Singapore experience. Kindly hosted in the Singapore Airlines lounge, their UK and Ireland General Manager Sheldon Hee stopped by to provide some parting words on what to expect in Singapore, including a warning about the humidity.

I also took some time before the mission hit the ground to chat to Emma Greenfield, Head of Events and Promotions at Enterprise Nation, asking about their other Trade Missions to other parts of the world. Having personally been involved in organising and attending Missions to New York, Hong Kong, Paris and their next trip to Dubai, Emma was well placed to discuss the differences.

“Compared to Trade Missions elsewhere, Singapore was so easy to organise. Businesses in Singapore were so eager to meet the UK delegates, we actually had to turn people away, which we’d never had to do before.”

It was certainly not for a lack of trying to fit everyone in. We had just 65 hours on the ground in Singapore, and squeezed an incredible amount out of that time, starting with landing at 7:30am local time on Thursday 21, still bright-eyed (mostly), with just a quick freshen-up at the hotel before diving into the first session of the Mission.

Muru-D is a Telstra-backed accelerator programme. Paul Meyers, Head of the Singapore office, and Craig Dixon, Entrepreneur in Residence, welcomed us and outlined how the appetite for investors had been growing over the years. Paul explained, “Singapore decided it was going to have a start-up culture 10-12 years ago. In that time, it has grown a huge pool of investors and attracted some incredible talent here; it will be very difficult for other countries to catch up.”

Craig continued, “Right. Indonesia is actually the fastest growing tech scene in the region, but even giants like Amazon come through Singapore first.” 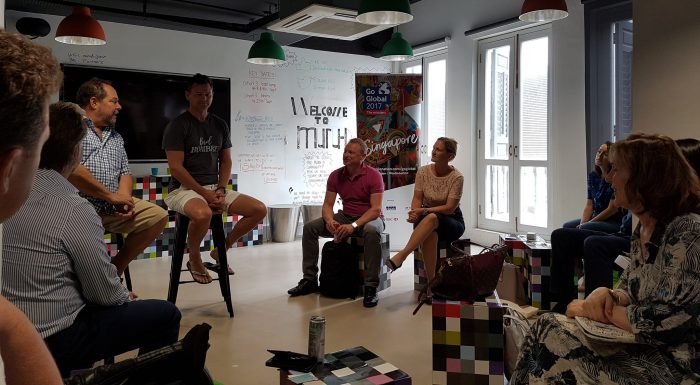 The afternoon sessions served to reinforce this as we blasted through presentations from the UKABC, DIT in Singapore, KPMG, HSBC, and the British Chamber of Commerce Singapore. UKABC Executive Director Ross Hunter introduced what we can offer UK companies, educating on the markets before linking to our partner organisations in the region. Zoe Fitzsimmons, Director of DIT Singapore, and Carole McCarthy from the British Chambers of Commerce Singapore, both spoke about their in-country support for new and established UK companies alike.

For anyone who had not slept on the flight, we were now on over twenty-four hours awake, which makes the presentations all the more impressive for being insightful and engaging in spite of the group’s jetlag! Mr. Ho Kah Chuan from KPMG, in particular, had the unenviable task of talking through tax incentives. Singapore has one of the lowest corporate tax rates in the region at 17% and there is no capital gains tax to speak of; they might not be glamorous facts, but it is vital information for businesses looking at setting up here.

After KPMG, we visited HSBC in Singapore. Rachel Speed, Regional Director of Small Business for South West & Wales, was accompanying the Mission and spoke about how HSBC could support small businesses in an exporting venture, and on her first impressions of Singapore. “One key thing in Singapore is the quality of services. They’re second to none.” One example was the provision of a mobile phone in the hotel rooms, allowing guests to stay connected during their time in the city without worrying about roaming charges.

For the Friday morning sessions, we were joined by another Trade Mission led by the Department for International Trade (DIT) and supported by Innovate UK. While the Enterprise Nation mission was geared towards start-ups, creative and media, the DIT programme was aimed at longer-established companies. Regardless, it was important for both groups to see some of the potential shared office space at Block 77, which is part of the JTC LaunchPad at the Singapore Science Park that now houses over 750 start-ups and 2,000 entrepreneurs, making it a fantastic community for new or outside start-ups to slot into.

We also visited the shared office space in Unilever’s building, Level3. Different to LaunchPad, Unilever’s space also boasted easy access to potential investors that start-ups could tap into and, importantly, the best coffee I had all trip (and where Ross discovered he doesn’t like chai). 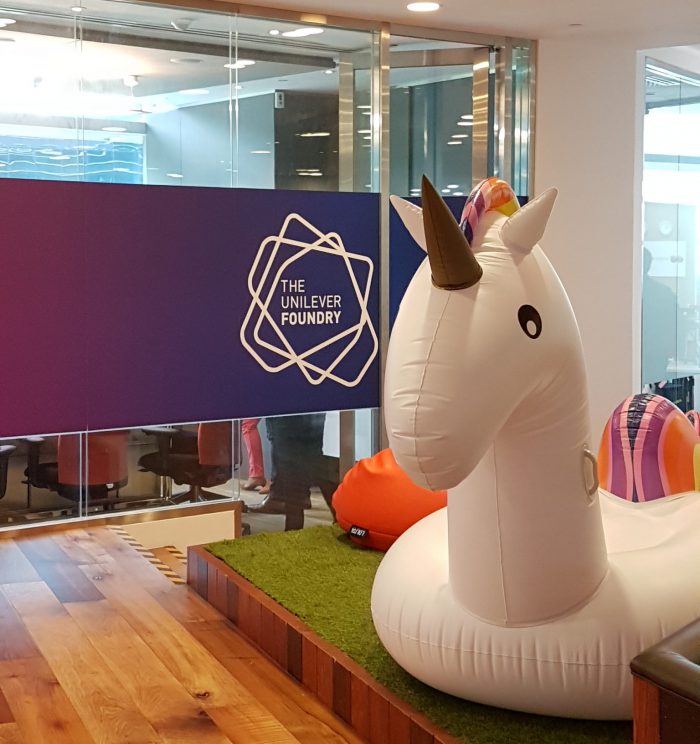 We were then whisked straight into a presentation from the Singaporean Economic Development Board. This included a discussion of the government’s one-stop procurement portal, GeBiz, and Smart City development opportunities for UK companies.

With no time to try the Singaporean cuisine for lunch, we split from the DIT mission and got stuck into our afternoon activity with Iris Worldwide, who gave an overview of their experience setting up in Singapore before sending the delegates out on a challenge, investigating how some of the biggest brands in Singapore were already taking advantage of the ‘Smart Nation’ initiative, and how they could better plug in to Singapore’s incredible connectivity and tech-savvy consumers.

We were then hosted for a great networking reception by RHTLaw Taylor Wessing, who brought in some great clients to mix with the delegates. Unplanned, the ever-energetic Margaret Manning, Director of Adelphi Digital and UKABC Board Director, invited delegates to dinner with her fabulous team.  The insights the Adelphi team were able to give to the delegates over an amazing Singaporean dinner were priceless, from the cost of recruitment, cunning retention strategies, and how to stay relevant in such a fast-paced marketplace.

The delegates could finally rest a little on Saturday… afternoon, but our final session of the Mission took place on Saturday morning, meeting Brits who are currently running businesses in Singapore.

They spoke candidly about the positives and challenges of the Singapore market. Delegates got a real ground-level view of starting out in Singapore, including an insightful discussion on employment passes and visas, and there was the opportunity to ask questions and network with the speakers and other attendees, including UKABC Chairman – Kevan Watts. To finish the morning, the speakers were asked what their top tips were for doing business in Singapore: 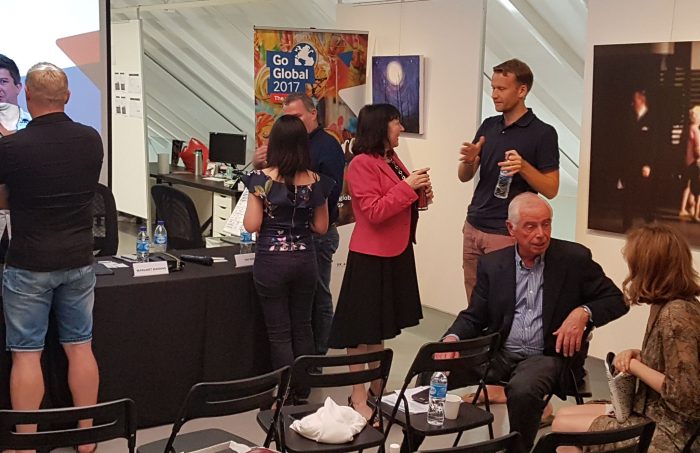 A little over a week now since returning to the UK, it has been great to hear some of the early feedback and initial stories of delegates following up. “What an amazing trip! I am now slightly overwhelmed by the sheer amount of work I need to do to follow up with everyone we met,” said Julie Choo, founder of Stratability.

Claire Cater, Founder and Hacker in Chief of the Social Kinetic, also made a great point, perhaps oft overlooked, about the value of attending a Trade Mission alongside like-minded individuals. She said, “Some of the best contacts were in the group itself – as well as future potential – they were a fabulous source of inspiration for me personally.”

Of course, UKABC comes to the fore now, helping companies navigate the next steps of entering the ASEAN markets. Ross Hunter said of the Mission, “You get out what you put in and if you came home exhausted, but full of insight and knowledge – job done! You are now on your ASEAN journey and so if you need anything else from UKABC, just email or call myself, or Marcus – we are here to help.”