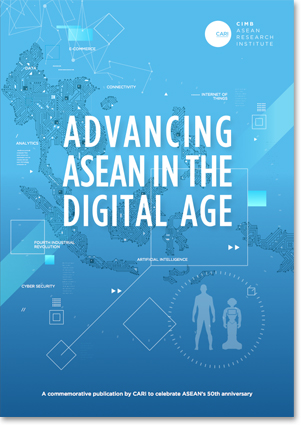 Advancing ASEAN in the Digital Age

The publication was produced by CARI in collaboration with the ASEAN Business Club to capture the ideas and perspectives of business and thought leaders as well as policymakers on the how the digital age will impact the economic prosperity of the region.

ASEAN, with a population of 634 million where half of which is below the age of 30, is touted as one of the fastest growing internet regions in the world. In fact, Google projects, out of the next billion internet users to come online, an astounding 600 million will be from the ASEAN region. In ASEAN’s golden jubilee year, this publication captures what policymakers and business leaders believe to be the most important opportunities for countries and businesses as well as the potential pitfalls.