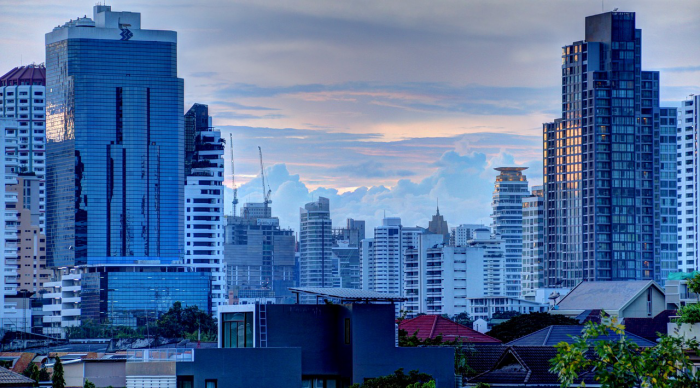 Will Bangkok’s real estate market be able to absorb its new office space?

Solid performance is expected in Bangkok’s commercial real estate segment this year, with the demand to remain high despite significant new supply coming onto the market.

Some 208,600 sq metres of office space is slated to enter the market in the capital this year, double the amount of last year, according to the “Bangkok Office Market Review” for the fourth quarter of 2018, released by real estate agency Knight Frank in March.

The new supply consists of three buildings with a combined space of 133,000 sq metres in the Central Business District (CBD) and two other developments in non-CBD areas that will add 75,600 sq metres to stock.

Despite the greater amount of leasable space, Knight Frank expects rental rates for all grades to increase steadily, albeit at a lower rate than the 6.8% average rental growth recorded last year.

While high levels of supply can often lead rents to contract, demand is proving strong enough to prop up rates. Furthermore, the net supply of office space may prove relatively flat if enough older buildings are taken out of commission for refurbishment, as was the case in the fourth quarter of last year.

Strong demand is also keeping vacancy low. Real estate consultancy CBRE forecasts that vacancy rates will remain steady at around 6% through to 2022, representing roughly half the level seen in 2011.

The positive market outlook comes despite slowing economic growth. The Bank of Thailand (BoT) in March revised its annual growth projection from 4% to 3.8%, itself down on the 4.1% growth achieved last year. Echoing this slower trend, GDP growth eased to 2.8% in the first quarter of this year, according to the National Economic and Social Development Council, the lowest rate in four years.

While there are some economic headwinds, the medium-term outlook for office space development appears positive, with a number of large-scale developments due to come on-line in Bangkok between 2021 and 2025.

More than 600,000 sq metres of new office space is scheduled to be released between 2020 and 2023, according to Knight Frank’s figures, while further projects are likely to be announced in the coming years, in line with forecast demand.

With most of the new floor space in the upper tier of the market, the capital could see tenants move away from older stock and into newly released offices. This could accelerate the existing trend of taking older space out of commission for renovation to better compete with the new spaces.

In terms of market trends, CBRE, in its “Real Estate Market Outlook 2019” report, noted that accessibility to mass transit, column-free space, advanced air systems, and lifts with higher capacities and speed are all in demand, while there is also growing appetite for co-working spaces, in line with international trends.

Ongoing demand for prime office space could offset a potential weakening in the residential segment, where there is an excess of supply and changes to the financial environment.

In November last year, the BoT announced new lending limits and higher down-payment requirements that took effect on April 1. This drove developers of residential properties to offload unsold units at attractive rates in the final months of 2018 and the first quarter of this year, according to Thailand’s Real Estate Information Centre.

This is coupled with the increasing cost of land in prime areas and the BoT’s decision in December 2018 to increase interest rates by 25 basis points to 1.75%, the first rise in seven years. Residential construction, especially of high-end condominiums, is therefore expected to slow as the market adjusts to the new financial parameters.