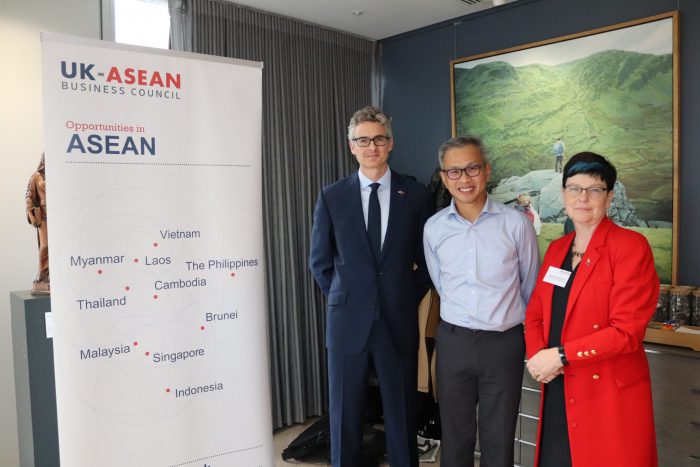 UKABC organised a business briefing on Malaysia with Tony Pua MP, Political Secretary to the Malaysian finance minister – Lim Guan Eng. Responding to a range of questions from UKABC guest participants, Mr Pua provided a macroeconomic overview with insight into the recently announced budget 2020 and the future direction of the Malaysian economy.

Mr. Pua provided context for the decisions that shaped the budget for 2020. Malaysia’s current growth rate is 5 per cent and it is hoped the polices in the budget will help the economy achieve 6-7 per cent growth in the medium term.

A focus of the budget is to attract more foreign direct investment (FDI). Malaysia is particularly keen on high value added FDI especially in higher end manufacturing and services given the nature and shape of its ageing and skilled population.

Approved FDI in the first half of 2019 grew by 97 per cent to £9.8 billion compared with £4.6 billion in the first six months of the previous year. The US continues to be the highest investor in manufacturing, mainly in the electrical and electronics sector, followed by China.

Mr Pua also provided an overview of Malaysia’s aims to accelerate the digital transformation of the country. The government has recently approved a £4 billion national connectivity plan that will provide nationwide digital connectivity that is of high quality and affordable for all Malaysians across the urban and rural divide. Details of the National Fiberisation and Connectivity Plan 2019-2023 can be found here.

Responding to a question on inclusive growth, Mr. Pua stressed the importance of shared prosperity that must be across the nation. Policies have to be designed for greater parity between the rich and poor. This included working with the private sector to ensure that infrastructure, including digital, is provided to areas outside of the main cities. In addition, the government is taking steps to encourage greater female participation in the labour market.

The discussion was moderated by Matt Cavanagh, Prudential’s Director of Group Government Relations. Our thanks to Prudential for kindly hosting this event.

Tony Pua MP is the elected Member of Parliament for Damansara, serving now in his third term which started in 2008. He is also the Political Secretary to the Finance Minister as well as DAP National Publicity Secretary.

Mr. Pua graduated from Keble College, Oxford University with a Philosophy, Politics and Economics degree in 1994, and subsequently founded and listed his Malaysian e-business company on the Singapore Exchange.

In early 2007, he sold his entire stake in the company to take part full-time in Malaysian politics. In the 2008 Malaysian general election, he won the parliamentary constituency of Petaling Jaya Utara on a DAP ticket. He ran against the incumbent, Chew Mei Fun, then Parliamentary Secretary to the Ministry of Women, Family and Community Development, In 2009, Mr. Pua was appointed the DAP member of the Pakatan Rakyat committee and retained his parliamentary seat in the 2018 general election with a majority of 106,903, the largest majority in Malaysian history.