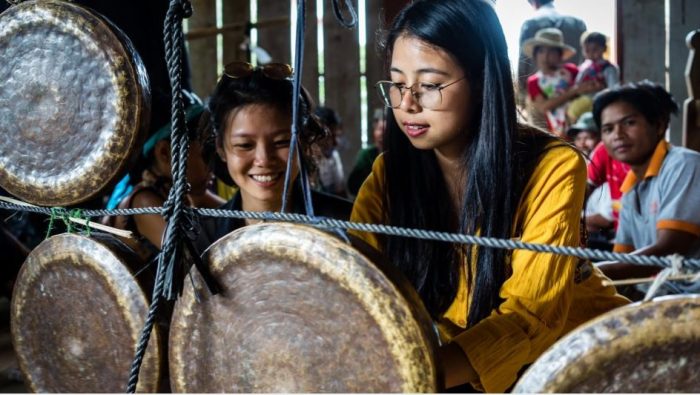 The view from Hanoi

Following the publication of Next Generation Vietnam, British Council Country Director Donna McGowan spoke to UK Ambassador Gareth Ward, who has been in the country for two years, on what the research suggests for the future relationship between UK and Vietnam.

What do you find to be the most striking Next Generation Vietnam research findings? What might they mean for how the UK engages with the country in the future?

The optimistic tone of the young people of Vietnam shines through. Education is playing a positive role to help them develop, so they are broadly confident about the world of work, and keen to set up their own businesses.  There are also positive signs about strong family relations being supplemented by improvements in gender equality and more acceptance of same-sex relationships.

However, like young people in other countries, Vietnamese youth want further change. They consume a wide range of media online and they want their voices to be heard, especially on issues like corruption, the environment and food safety.

Many of these areas already involve extensive engagement with the younger generation. For example, our anti-corruption initiatives through Prosperity Fund work closely with young entrepreneurs to equip them with business integrity practices. And we have tapped into enormous enthusiasm from the younger generation for our campaigns on education and LBGTQ rights.

How is research like this useful when it comes to building the relationship between the UK and future leaders in countries like Vietnam?

More, and better data is always helpful. Because of its youth and inherent dynamism, Vietnam is attracting significant international attention.

There can be no room for complacency for aspiring foreign partners. Diplomacy, especially in fostering people-to-people relations, is a competitive business.

As the Next Generation project shows, perceptions of the UK are broadly positive, but we understand that we need to keep our offer relevant to the ambitions and needs of Vietnam’s young people.

How would you like to see soft power/cultural relations between the UK and Vietnam evolving in the next 10 years and beyond?

I had to smile at the Next Generation project’s finding that Vietnam’s youth ranks the UK as Number One for sports. I’m not sure supporters of our national teams in the UK would see it the same way.  But there is no doubt about the world class quality of much of the UK’s sporting offer, be it Premiership football or Formula One racing. This happens as a result of openness to international sponsors and participants, as well as constant innovation and commitment to a global audience.

It provides an immediate common point of reference when British people meet Vietnamese people. In 2018, we organised the first British festival in Hanoi, featuring areas of soft power and cultural areas including sports, music, fashion, and education. The festival attracted hundreds of thousands of visitors per day and was a great success. I would like to see these common points expand over the next ten years.

In turn, this should open doors for more young Brits to want to come to Vietnam to study, to pursue scientific research together, and to create businesses that can tackle our common challenges in an innovative way

Considering what Next Generation tells us about the interests and needs of Vietnamese youth, where do you see the UK’s competitive advantage, as compared with neighbouring countries like China or South Korea, or other European or English-speaking nations?

The data shows that UK education is a clear strength. The UK offer to young Vietnamese includes high quality English language teaching as a vocational skill and both secondary and tertiary level education in both the UK and in Vietnam.

The Next Generation report shows that young Vietnamese value the life skills, such as communication and critical thinking, that such an education can provide in addition to the core academic curriculum. These skills are recognised as particularly useful for building a successful career, especially for entrepreneurs.

The data also shows that young Vietnamese are more likely to look for employment opportunities in countries closer to home, such as Japan and South Korea, before returning to Vietnam.

We should take a closer look at how we can build on the attractiveness of a UK education to encourage more Vietnamese entrepreneurs to look at business opportunities both in the UK and with UK counterparts in Vietnam.

At a time when humanity faces huge global challenges, and with competition dominating in international relations, what role can soft power and cultural relations play to foster dialogue, co-operation in a way that also supports the UK’s long-term ambitions at home and abroad? Consider this in the Asia Pacific region as well as the context of Vietnam.

As stated earlier, soft power and cultural relations help to build trust and familiarity, which in turn help to underpin co-operation to tackle common challenges.

In the UK, many say that the pandemic has brought families and communities together in ways that were being forgotten. The Next Generation report shows that modern Vietnamese are embracing the individual freedoms that modern technology provides, but family, friends and community remain a priority.

The pandemic has arguably narrowed perceived difference between East and West at the individual level. I anticipate that soft power and cultural relations will pick up on this and can help to buffer the rougher edges of increased geo-political competition.

What can the UK learn from Vietnam and its neighbours in terms of building their soft power and reputation on the global stage?  What does this tell us about the sort of partner the UK needs to be for East Asia Pacific countries to maintain and enhance relationships of trust and influence?

The Next Generation report shows that the UK enjoys very positive association in Vietnam. Korean music and film is at a high point.

Traditionally the UK has seen itself as strong in these areas, but the report interestingly shows that UK science and technology (as well as sport and education) scores well in Vietnam.

These matter as we face a global public health crisis and accelerating concern about climate change.

Beyond specific content, the UK might adopt a more ‘East Asian’ posture as it seeks to build trust and influence: be optimistic, think long-term, value personal relationships, respect partnerships of equals, and show a degree of humility, especially in public.