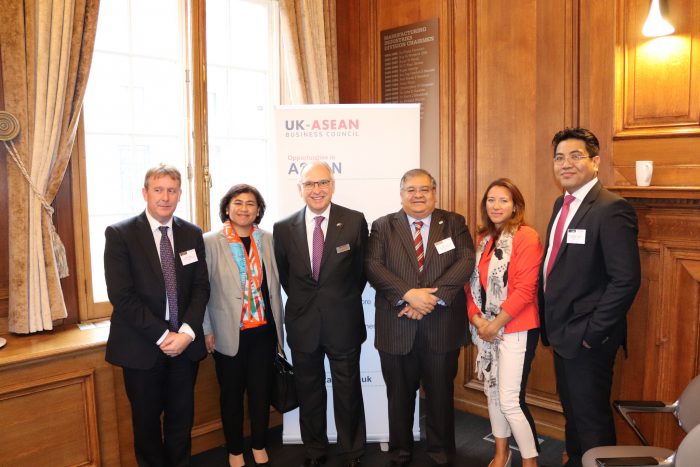 The UK-ASEAN Business Council was delighted to be co-organising this important roundtable with the visiting delegation of the Kuala Lumpur Business Club (KLBC). The aim of the roundtable was to share insights on the latest developments in the UK and Malaysia and to discuss the growing UK-Malaysia trading relationship post-Brexit.

The roundtable provided a fantastic opportunity to network and hear first-hand from business leaders on the latest developments in Malaysia and what that means for the future of our trading relationship with them in the UK.

Opening remarks were from:

As the UK approaches Brexit, its imperative for the UK to embrace all business/trade relationships with ASEAN countries along with the broader economic ties, these partnerships are going to be even more important than they have been already. Now is the time to really push those relationships and to build on and a future for the sake of not only the United Kingdom but also our ASEAN partners as well. Clearly, Malaysia is pivotal to that development because of its position within ASEAN, its economic weight, its political importance and the tremendously strong historical ties that the UK and Malaysia have had for many years.

It’s a time of upheaval both in the UK and Malaysia, people are happy about the change in Malaysia; it seems the country has bucked the regional trend in the sense of the nation’s voters opting for a liberal government as opposed to a populous one. One thing people should reflect on is the fact that the political outcome in Malaysia is an example of the growing impact that young people are having on elections. Now is a time of renewal of the great bonds between the UK and Malaysia. The recent elections have reminded everybody of the power of democracy to renew people’s faith and optimism in the direction of a nation.

Despite the headlines in the media, the consensus is that the UK is going to eventually reach a deal with the European Union by the end of November. The question is then ratification by the two parliaments, and at that stage, we will broadly know the relationships between the UK and the EU, which will, of course, encompass free trade agreements. This applies both to both the UK and EU and the direction of free trade agreements between the UK and the rest of the world.

This gives the UK an opportunity to look at what more the nation can do to deepen ties with regions like ASEAN and long-standing allies like Malaysia. The good news in terms of British commitment is that the next few weeks in Malaysia will see two Ministers, the new Trade Commissioner for Asia Pacific region, an outward delegation of companies from Wales, an inward visit from MDEC (Malaysia Digital Economy Corporation), and outward delegation from UK tech companies, an event in Kuala Lumpur to promote trade and investment in oil & gas plus announcements about large national investments by British companies in Malaysia.