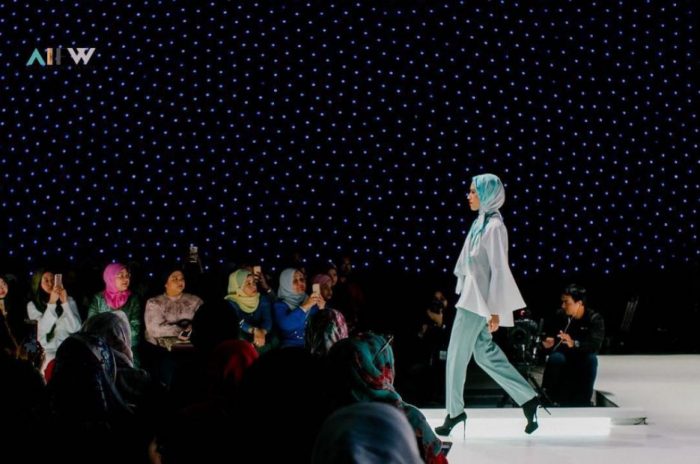 Organisers adopted the theme of “Establishing Asia as a Global Centre for Islamic Fashion” – fitting, given in the demographically young, rapidly growing economies of the Asia-Pacific region, one in four people is Muslim.

Modest wear has emerged as a buzz-term in recent years, as Muslim consumers have sought clothing that is not only halal, but also stylish in a 21st-century context. The event attracted fashion houses from places as far flung as Japan, France, the Netherlands, and South Africa. A raft of notable attendees included New York-based ELLE columnist and Haute Hijab CEO Melanie Elturk, Malaysian TV host, musician and style icon Mizz Nina, and the Indonesian trailblazer of modest fashion Dian Pelangi, who boasts 4.7 million followers on Instagram.

According to Thomson Reuters’ 2016/17 State of the Global Islamic Economy Report, Muslim consumer spending on clothing was estimated at US$243 billion in 2015, or 11 percent of the global total on apparel. According to the Pew Research Center, more than 60 percent of the world’s Muslims live in the Asia-Pacific region – a far greater number than in the Middle East and North Africa. What’s more, the world’s Muslims are young. The median age of world Muslims in 2010 was 23.

“In today’s world, Muslims have the largest population of millennials, and they’re demanding to be more and more stylish,” Islamic Fashion and Design Council chairman Alia Khan told CBS News last year. Alia was the International Adviser for AIFW 2017. “No one has gone unscathed with the selfie thing. That’s very much a part of the lifestyle today.”

To read the full article, please follow the link below.