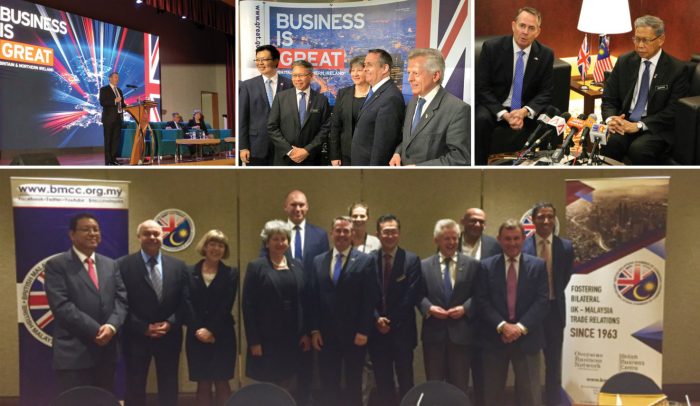 Malaysia and Britain: Partners in a Post-Brexit World

Mr. Graham, Theresa May’s Trade Envoy to Malaysia, began his visit in Johor. The BMCC had visited previously on the 30th March to witness the official opening of Owen Mumford, one of UK’s leading medical devices company and creators of the world’s first automatic insulin pen. HE Vicki Treadell was there to officiate the launch together with Mr. Joerg Daehn, Regional MD of Owen Mumford and Tuan Haji Suhairi Hj Hashim, representative of the Chief Minister of Johor.

The BMCC, represented by Executive Director Aurelia Silva, returned to Johor to join Richard Graham MP on his visit around the state. Among the companies visited there were Dyson, Iskandar Malaysia, and the Alexander Dennis Limited (ADL) factory, the world’s best bus company and recording over 1,650 buses manufactured across Asia.

Back in KL on the 4th of April, Richard Graham MP spoke at another event hosted by the BMCC, reassuring of the UK’s economic fundamentals and Malaysia’s growing standing with the UK in light of the recent triggering of Article 50. He reaffirmed that the UK is more determined than ever to bolster trade relations in the ASEAN region, and the Malaysian market’s dynamism is the perfect gateway to expanding business to the South-Asian Pacific region.

Malaysia and Britain: Partners in a Post-Brexit World

HE Victoria Treadell, the British High Commissioner to Malaysia, opened by speaking on the recent triggering of Article 50, as well as the approach and ambitions of Malaysia in strengthening the trade relations with a more independent United Kingdom. Also at the event was the Malaysian International Trade and Industry Minister, Datuk Seri Mustapa Mohamed. He said that “Malaysia is committed to deepening the already strong relationship with the UK. Malaysia-UK ties have never been so impactful and flourish due to the continued success of the two countries in many sectors.”

Liam Fox MP said the UK affirmed its commitment to increase trade and investment as part of a determined effort to reach out to its trading partners, and to reassure that the UK was open for business. He also acknowledged the massive investments by Malaysian companies in the UK including that of the Battersea Power Station, a project by SP Setia, Sime Darby and the Employees Provident Fund, as well as the presence of the likes of EcoWorld, Khazanah Nasional and many others.

The full transcript of his speech is linked below.