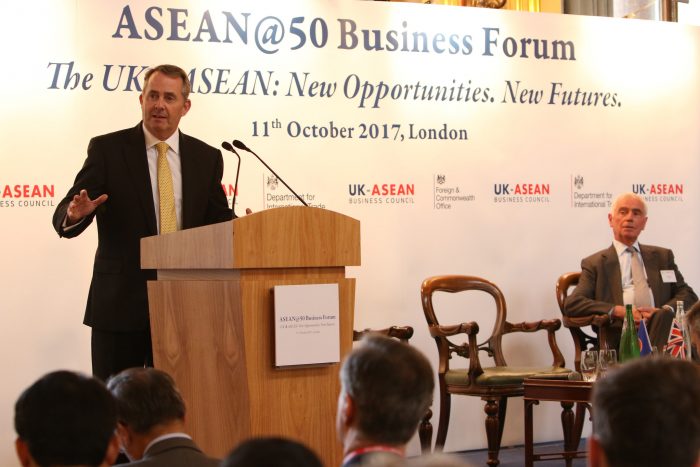 The Association of South East Asian Nations (ASEAN), which is celebrating its 50th anniversary this year, is hosting the event to highlight business opportunities and celebrate the region’s strong economic growth.

Addressing a range of businesses and diplomats, the Secretary of State emphasised the deep relationship between Southeast Asian countries and the UK, and spoke of his desire to improve trade relations with the region as the UK leaves the European Union.

Currently 15% of all ASEAN’s EU trade in goods and services is with the UK, and exports have risen rapidly to the likes of Singapore and Indonesia in recent years. The stock of UK Foreign Direct Investment in both countries also increased by 8.3% and 4.4% respectively last year.

With a population of more than half a billion people, and average economic growth of 5% over the last decade, the region has immense potential for increasing trade and investment with the UK. The Secretary of State has visited the region five times since the Department of International Trade was created last year, and has been deeply impressed with the appetite to do business with UK companies.

International Trade Secretary, Dr Liam Fox, said “ASEAN countries already have strong trading ties with the UK and, as we leave the EU, the region’s rapid growth presents a huge opportunity for British business to forge even closer ties with businesses across Southeast Asia.

“As an international economic department, we will support UK companies wanting to export to ASEAN markets, and will continue to encourage investment between the region and the UK.”

UKABC will look to further collaborate with DIT in the ASEAN region, including advancing engagement with the ASEAN Secretariat, ASEAN Business Advisory Council and promoting events in Southeast Asia so that UK business can be further integrated into this ever-growing region.

DIT recently published its white paper ‘Preparing for our Future UK Trade Policy’ and is encouraging businesses to feedback and input. Feedback should be sent to stakeholder.engagement@trade.gsi.gov.uk by 6 November.