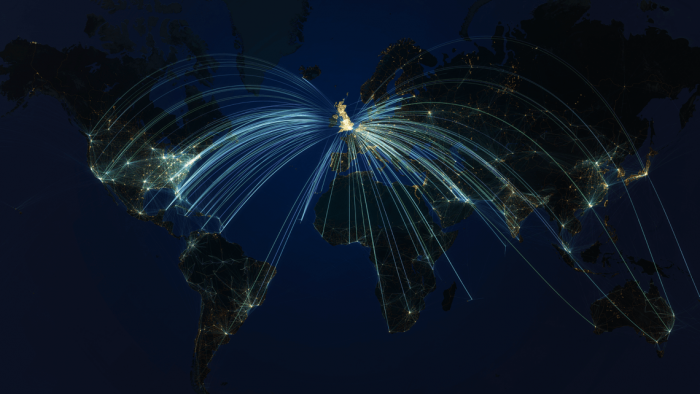 New export strategy aims to increase UK total exports as a proportion of GDP to 35%.

International Trade Secretary Dr Liam Fox MP, will today (Tuesday 21 August) set out how the government will make Britain a 21st century exporting superpower through better use of our overseas network, new online tools and building an extensive business to business network.

This comes as the government continues to roll out sector deals as part of the Industrial Strategy, boosting jobs and growth in the areas where the UK has a competitive edge – now supporting the export of this expertise across the world.

Research shows that companies that export have increased growth potential, are more productive and have better paid jobs.

Last year £620 billion of goods and services exported by British companies accounted for 30% of our GDP, with UK exports are at a record high.

However, the Department for International Trade estimates that 400,000 businesses believe they could export but don’t, while demand for British expertise and goods overseas is only growing.

Dr Fox, joined by Baroness Fairhead, Minister of State for Trade and Export Promotion, will today set out the government’s long-term ambition to go further and increase total exports as a proportion of GDP to 35%.

Responding to a call from business, The Export Strategy outlines how the government will produce smarter and more tailored support to UK companies. There are key elements to the strategy to support companies selling overseas:

This includes an increased focus on amplifying the voice of existing exporters to inspire other businesses and facilitating peer-to-peer learning.

New measures include developing great.gov.uk into a single digital platform for both domestic business growth and export support and working with large companies to help build the capability of UK supply chains. We will also assess financial incentives and signposting as a means to support SMEs access new markets and private sector export support.

New measures include support for businesses looking to invest overseas and developing an online tool enabling businesses to submit non-tariff barriers they face.

Deploying an awareness campaign to target UK exporters most likely to benefit from up to £50 billion worth of export finance and insurance support from UK Export Finance (UKEF), and promoting UKEF support in overseas markets to help UK companies and consortia win contracts.

In a speech to a business audience in London, International Trade Secretary, Dr Liam Fox MP is expected to say:

The United Kingdom is a great exporting nation and our exporters lead the way, in creating jobs, raising wages and growing our economy.

UK businesses are superbly placed to capitalise on the rapid changes in the global economic environment and I believe the UK has the potential to be a 21st century exporting superpower.

As an international economic department, we are determined to support, connect and grow UK companies on the world stage through our international network.

As we leave the EU, we must set our sights high and that is just what this Export Strategy will help us achieve.

Baroness Fairhead, Minister of State for Trade and Export Promotion at the Department of International Trade, said:

Since its creation 2 years ago, DIT has already helped thousands of UK companies to export – with exports now at a record high.

As the world’s sixth largest exporter, we do punch above our weight, however, we also punch below our potential. This Export Strategy sets out to change that and to increase exports as a proportion of GDP from 30% to 35%, taking us from the middle of the G7 to near the top. This is ambitious, but achievable.

This strategy builds on the UK Industrial Strategy and our existing export support services – our network of trade advisers and promoters across the UK and in 108 countries worldwide, UKEF’s £50 billion capacity to support exports in 60 currencies, and our great.gov.uk service. To achieve our aim, government must join up across departments to enable UK companies to succeed overseas.

This strategy is a first step – a foundation – for a new national drive to export.

Expanding trade is fundamental to creating new jobs, raising productivity and increasing prosperity across the country. This strategy is a timely signal that the government is committed to improving the United Kingdom’s international competitiveness.

The CBI strongly supports the ambition to make exports 35% of GDP, which will put the UK out in front of many of our international competitors. We estimate that in every region of the country there are around 10% of businesses that could export, but don’t, and we look forward to working alongside the government to support and inspire them to seize the opportunity.

The CBI has consistently called for a long-term approach to exports. Previous strategies have come and gone, but businesses have been let down by their execution. Firms will work with the strong team in place at the Department for International Trade to ensure these plans are now rigorously carried out.

Dialing up the intensity of UK trade – both close to home and further afield – will be the cornerstone of our future economic success.

Working together, business and government have a real opportunity to turbo-charge UK exports, and help more of our firms increase sales and profits in markets all across the world. Our biggest competitors invest heavily in promoting their countries’ products and services, and the UK must match or exceed them.

We welcome the government’s pledge in the new Export Strategy to work hand-in-hand with business to unlock opportunities for UK firms all across the globe. A clear, long-term commitment to support British firms on the ground – both here at home and overseas – is needed to provide a springboard for many companies to take risks and go for growth.

Stephen Martin, Director General of the Institute of Directors, said:

Maximising trade opportunities across the globe will be key to the UK’s future economic success, so we welcome this new export strategy, which provides a solid foundation upon which to build. The government deserves credit for investing time and effort in working with business to draw up this strategy, and we are delighted that a number of the IoD’s recommendations have been incorporated.

Improving the UK’s export performance will depend upon many variables, but the good news is that there is plenty that can be done now to help businesses, irrespective of Brexit. We will be encouraging our members to engage with government to make sure this strategy really takes off and enables British firms to realise their full trading potential.

The government’s new network of HM Trade Commissioners will help improve government-to-government relationships to reduce tariff and market access barriers as we leave the EU.

In a series of high-profile appointments by the department, earlier this year DIT appointed former Barclays head of corporate banking John Mahon as the UKs first Director General for Exports, to lead the implementation of the strategy.

And former Citgroup banking vice-chairman Mark Slaughter was appointed in June as Director General for Investment, to lead a drive to attract more investment into the UK.

The strategy builds on an already strong DIT offer to businesses which includes 250 International Trade Advisors around the UK, showcased export opportunities on great.gov.uk and UKEF support such as trade finance.