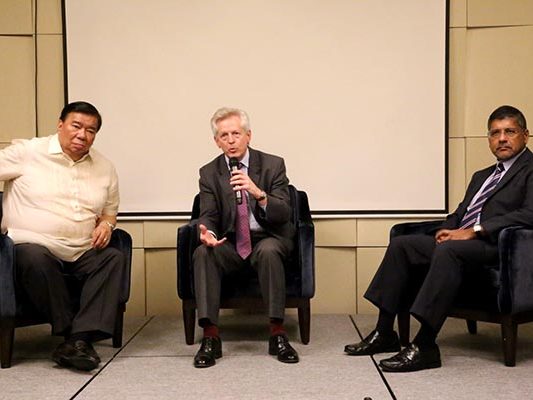 A British delegation, led by Ambassador to the Philippines Asif Ahmad and the Prime Minister’s Trade Envoy Richard Graham, was in town over the weekend for the staging of the Great British Festival wherein they promoted educational opportunities in the United Kingdom and explore investment opportunities in Iloilo’s retail sector.
“One of the reasons we came here is to explore opportunities of business outside Manila,” Mr. Ahmad said during Friday’s opening of the three-day festival, noting the growth of Iloilo City as the center of the Western Visayas Region.

In his speech, Mr. Ahmad said Iloilo is a potential investment area for retail, citing at least three British brands that are already present in the city.

”We are very interested in the growth of this region,” he added.

The delegation went on a tour of the Iloilo Esplanade, a project initiated by Senator Franklin M. Drilon, who was also present during the event. Another stop was the statue of Nicholas Loney, the first British vice-consul posted in Iloilo in the 19th century, who is credited with pioneering the sugar industry in the islands of Panay and Negros.

On education, Mr. Ahmad said they are looking at possible partnerships with the city government as the UK has “particular expertise” to offer.

Mr. Graham, in his speech, said the potential opening of British universities in the Philippines would be an opportunity for Filipinos to learn about the culture of UK at a cheaper cost.

Mr. Drilon, for his part, assured the delegates that Iloilo and the entire Western Visayas is “open and in the best shape for business.”

“Your visit to Iloilo comes at a most auspicious time. The winds of development and prosperity are blowing once again on our shores because of the development initiatives and reforms we have undertaken in recent years,” said the senator, who comes from Iloilo.