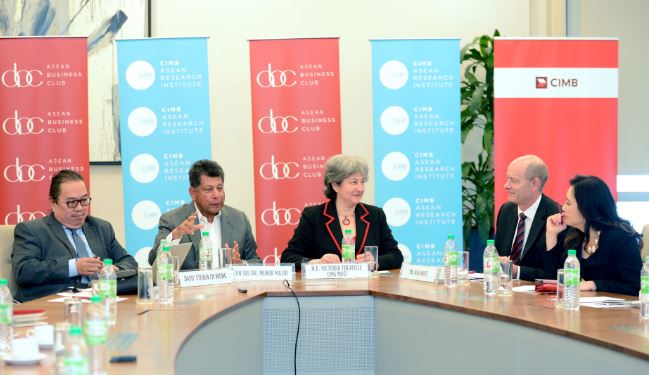 ASEAN should remain focused on its economic agenda and not let political issues cloud its vision of integration. In view of rising protectionism globally, this was one of the key themes that emerged during a roundtable titled, “Lessons learned from Brexit: risks and opportunities for ASEAN?” which was organised by CIMB ASEAN Research Institute (CARI) on 20 April, in collaboration with the ASEAN Business Club.

H.E. Victoria Treadell, British High Commissioner to Malaysia, reiterated UK’s commitment to free trade and establishing robust economic ties with not only the European Union (EU), but also with other regions such as ASEAN.

“The UK will continue to be more outward looking than before. Britain sees the ASEAN Economic Community as an important destination for its goods and services and a source of investment, half of all ASEAN investment into Europe goes to the UK. Measuring trade & investment with ASEAN is of economic interest to both the UK and ASEAN,” said H.E. Victoria Treadell.

However, Tan Sri Dr. Munir Majid, Chairman of CARI, warned it would be too easy a conclusion to draw that the lesson from Brexit was that ASEAN should not be too aggressive in its integration process.

“On the contrary,” he said, “against what ASEAN has promised with the AEC, its non-fulfillment would be a blow to businesses which would begin to have less faith in the economic, and other, integration processes. ASEAN’s plan of action, including and particularly assistance to micro, small and medium enterprises (MSMEs), must be carried out. If MSMEs fail, the ASEAN economy will fail, and its integration process will be rolled back as individual economies seek to protect jobs.”

Nick White of Trowers & Hamlins advised businesses to keep track of red-headline issues during UK’s Brexit negotiation with the EU, and not to jump at every twist in the negotiations. “Although maybe not many in number, ASEAN businesses that “passport” from the UK into Europe, and vice versa, will need to assess the new position carefully. Businesses that adhere to standards in any industry will have to observe any future variations in those standards between the UK and the EU,” he said.

Echoing this view, Dato’ Steven CM Wong, Deputy Chief Executive at Institute of Strategic and International Studies, called for pragmatism, “Brexit poses both challenges and opportunities. With multiple unknowns, the future is yet to be cast in stone. The need today is not for dogmatism but pragmatism, agility, and fleet-footedness.”