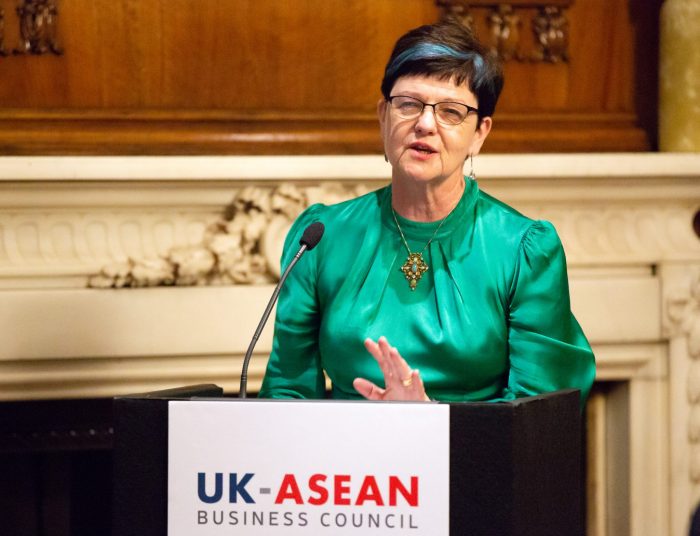 The UK-ASEAN Business Council (UKABC) is delighted to announce that Baroness Lucy Neville-Rolfe DBE CMG is its new Chair.

Baroness Neville-Rolfe becomes UKABC Chair as ASEAN’s economy grows from strength to strength. ASEAN’s economic growth continues to average 5.4% and is predicted to be the world’s fourth largest economy in the world by 2030 after the US, China and the EU.

UK-ASEAN trade is now worth nearly £37 billion. The ASEAN export market is worth more to the UK than that of Australia, Brazil, India, Japan, New Zealand, Russia and could soon overtake China. As a region its economy is bigger than India’s and its population of 639 million is the third largest consumer market after China and India.

Baroness Neville-Rolfe said “I am delighted to be appointed as Chair of the UKABC at such a pivotal time in the UK’s trading history. As British companies look to develop and strengthen their presence in one of the world’s key markets, the UKABC plays an integral role in facilitating business growth.”

UKABC Executive Director – Ross Hunter, said “Baroness Neville-Rolfe brings a blend of expertise and experience from both government and business and a passion for Southeast Asia. Our new Chair will allow us to strengthen our UK-ASEAN business network to help us drive interest, exports and investment between the UK and ASEAN.”

Natalie Black, Her Majesty’s Trade Commissioner for Asia Pacific, said “I look forward to working with Baroness Neville-Rolfe to promote opportunities for British businesses in ASEAN. UKABC is a key partner and I look forward to building even stronger UK-ASEAN business relationships together.”

The UKABC is the leading UK-based organisation promoting trade and investment between the UK and ASEAN’s dynamic markets. For more information on UKABC please click here or contact allen.lai@ukabc.org.uk.

Currently she is a Conservative peer, sitting on the Lords EU Committee (and its Financial Services sub-committee), is Chairman of Red Tractor (the food assurance organization) and is a non-executive director of Capita plc, Secure Trust Bank Plc, Thomson Reuters Founders Share Company and Health Data Research UK

Lucy became a peer in 2013 and was Parliamentary Under-Secretary of State for Business and Minister for Intellectual Property from 2014-2016. She represented the UK on the Digital Single Market and in the EU Competitiveness Council. From 2016-2017 she was the Minister of State responsible for energy and then Commercial Secretary at the Treasury.

Lucy is a Governor of the London Business School and an honorary fellow of her old college, Somerville College, Oxford. She is married with four sons, and is interested in the arts, cricket, racing and gardening. She lives in Southwark and Wiltshire.