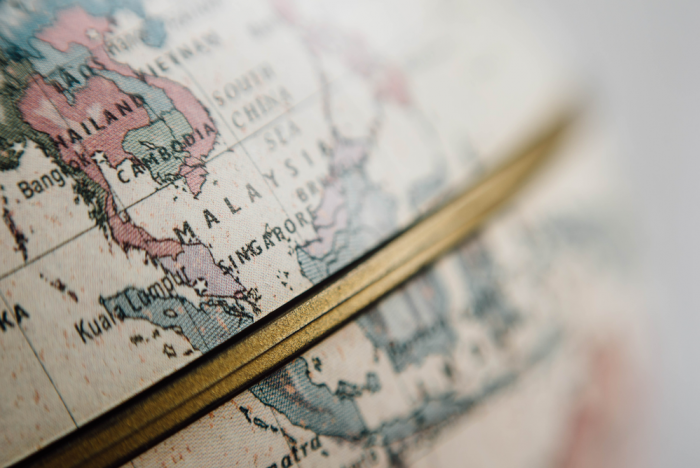 Webinar: CARI Briefings – How can ASEAN bounce back 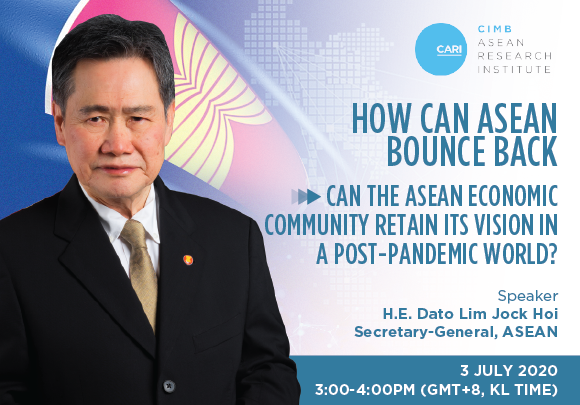 To counter the economic impact from the lockdowns imposed to control COVID-19, ASEAN member countries have implemented a series of relief measures aimed at sustaining their economies. While these measures are implemented at the national level, ASEAN has also moved towards regional coordination.

In March, ASEAN Economic Ministers issued a joint statement that called for collective action to mitigate the impact of the coronavirus and in April, ASEAN leaders called for a post-pandemic recovery plan and proposed the establishment of a COVID-19 ASEAN Response Fund.

Join this webinar as Tan Sri Dr Munir Majid (Chairman of CIMB ASEAN Research Institute, otherwise known as CARI) speaks to ASEAN Secretary-General, H.E. Dato Paduka Lim Jock Hoi on the current progress of ASEAN’s COVID-19 related plans for the region and how the regional bloc intends to achieve its vision of an integrated economy in the new normal.

Dato Lim Jock Hoi was the Permanent Secretary at the Ministry of Foreign Affairs and Trade, Brunei Darussalam since 2006.

From June 2011-2017, he was the Chairman of the Governing Board of the Economic Research Institute for ASEAN and East Asia (ERIA). He was also on the External Advisory Board for the ASEAN 2030 Study being undertaken by the Asian Development Bank (ADB).

He entered the Government Service as an education officer in 1977 and served as principal of a Secondary School from 1981 – 1985. From February 2001 – July 2005, he was appointed as Director-General, International Relations and Trade Development, Ministry of Industry and Primary Resources. In September 2005, he was appointed as Deputy Permanent Secretary, Ministry of Foreign Affairs and Trade.

He graduated from the City of London Polytechnic in B.Sc (Hons) Economics in 1976 and received his Post Graduate Certificate of Education in 1977. He was awarded The Most Honourable Order of Seri Paduka Mahkota Brunei, second Class (D.P.M.B) in 2007. He is married with two sons.

Tan Sri Dr Munir is currently Chairman of CIMB ASEAN Research Institute, of the Financial Services Professional Board, of ASEAN Business Advisory Council, Malaysia, as well as President of the ASEAN Business Club. He also sits on the board of the Institute of Strategic and International Studies (ISIS) Malaysia and is board chairman of the Institute for Capital Market Research Malaysia (ICMR). He is an active advocate of deeper ASEAN economic integration.

He has extensive experience and is well known in the Malaysian corporate world. He is formerly the Chairman of Bank Muamalat Malaysia Berhad (2008-2020). He had been the Group Editor of the New Straits Times, first executive chairman of CIMB and founding chairman of the Malaysian Securities Commission. After stepping down from the Securities Commission, he became Independent Non-Executive Director of Telekom Malaysia Berhad, Chairman of Celcom (Malaysia) Berhad and Non-Executive Chairman of Malaysian Airline System Berhad. He was Founder President of the Kuala Lumpur Business Club, established in 2003 and is a member of the Court of Fellows of the Malaysian Institute of Management.

Tan Sri Dr Munir obtained a BSc (Econ) and PhD in International Relations from the London School of Economics and Political Science (LSE) in 1971 and 1978. He is an Honorary Fellow of LSE and continues the long association with his alma mater as Visiting Senior Fellow at the Centre of International Affairs, Diplomacy and Strategy. Tan Sri Dr Munir is an associate of Southeast Asia Centre (SEAC) at LSE.

To register your attendance to this webinar please click the link below.