This is the first episode of BritCham Indonesia’s Ministerial series and it focuses on East Java, Indonesia’s second-largest province by population with the capital city of Surabaya, a major industrial and business centre. Surabaya is designated the city for the country’s new capital.

Many British businesses situated in Indonesia has branch operations across services and manufacturing. East Java has a strategic location with ports being used as a hub for domestic and international trade and as a gateway to East Indonesia and the ASEAN Economic Community.

Speakers for this webinar include East Java Deputy Governor, Emil Dardak who will set out the vision and ambition of a province keen to build on its trade and investment relationship with the UK. Her Majesty’s Trade Commissioner for Asia Pacific,  Natalie Black and Difi Ahmad Johansyah, representing the Bank Indonesia Investor Relations Unit will also be joining to give their insights. 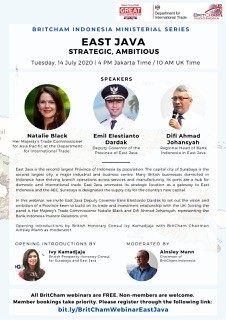